AGAINST NACHUM, part 3 Responding to his “28 Questions Addressed” video series

AGAINST NACHUM, part 3
Responding to his “28 Questions Addressed” video series

Unless otherwise noted, all scripture references are from the King James Version.
Estimated read time: 9 minutes, 16 seconds, according to Read-O-Meter.

QUESTION #9: The gospel commission in Matthew contains this…”Teaching them all that I have commanded” and Jesus commanded the Ten Commandments (Matthew 5:19, 19:17-19. Did Jesus command Sunday?

Sola’s Response: Now that type of question is the kind of style he uses a lot… a question that can be used against a doctrine that he holds to. I can say, did Jesus command to believe in the Investigative Judgement or any other peculiar Adventist teaching… it’s not a meaningful question; when it can be used against your own position then it shouldn’t be used.

He quotes Matthew 5:19 and Matthew 19. I’ll address these real quick… Adventists misuse both of them and they really don’t understand them. (reads Matthew 5:19, then 17-18). Now, they interpret that to refer to the Decalogue, and say, well, heaven and earth are still here, therefore, the law is still here… not just nine but all ten… unfortunately for them, read the context and you’ll see, especially the phrases “law and prophets” or the “law” … that’s referring to the whole Old Testament. That’s not referring to the Decalogue and the prophets, it’s referring to the torah and the prophets.

I would also point out in the context, he goes on to say in verse 27 (quotes verse 27-28). So he’s expounding on these commandments and they will say, “See, commit adultery, that’s the ten commandments.” [but] in verse 25 (quotes verse 25)… if you go down and read all of these you’ll see that not all of these commandments are the commandments of the Decalogue, but they are from the Decalogue and the Torah as well. That’s the issue they always have, this is the biggest issue with them. They’ll see words like “Do not steal” and in their mind, they’ll (think) Christ is saying “keep the Decalogue” therefore “keep the Sabbath day.” I know it seems strange but when they read “do not kill, steal, etc” they’ll read the whole Decalogue and then assume the Sabbath into that and say you have to still keep the Sabbath. These are basic questions but they get at the core of their false assumptions and presuppositions that they bring to the texts. Read Matthew 5 and you’ll see there are other commandments besides the Decalogue.

(quotes Matthew 19:17-19) Now an SDA will stop there and say “if you want eternal life, keep the commandments.” So, on the one hand, an Adventist will say, “I don’t believe in works-based salvation. But then Jesus right here says ‘keep the commandments and you’ll have eternal life.’” Then they’ll try to differentiate and say, “eternal life is not a part of salvation, yea a bunch of wordplay.” (quotes verse 18). Now all of these, except for the last one, are from the Decalogue. In my opinion, that’s because the Decalogue was the Suzerain/Vassal covenant made between God and Israel. Now that last one, “you shall love thy neighbor as thyself” where that found? It’s not found in the Decalogue. Its found in the Law of Moses, and that’s an important point to bring out when talking to Adventists.

Now [always] go to the parallel story of Matthew 19 because that gives you more content. (quotes Mark 10:18). First, he never quotes the Sabbath commandment. The more important point, in Matthew he throws in “love your neighbor as yourself” and here “do not defraud.” Why throw those in when he wants to focus on the Decalogue only? Because Adventists will say that the first four commandments are how you love God, and the last six are how you love your neighbor. And that’s how they get around that. But that’s not what the texts say.

Why add “do not defraud?” Because that’s from Leviticus 19:12-17 and that’s from the law of Moses, that their own teaching says it’s done away with. And yet whenever you bring them to these kinds of things they will backtrack a bit and say, “these are summed up in the Decalogue.” Honestly, you just gotta be on your toes with them. It seems like they make up stuff on the spot.

Edwin’s Response to Sola: Quoting Sola, “Now that type of question is the kind of style he uses a lot… a question that can be used against a doctrine that he holds to. I can say, did Jesus command to believe in the Investigative Judgement or any other peculiar Adventist teaching? … it’s not a meaningful question; when it can be used against your own position then it shouldn’t be used.”

Actually, this can be done with pretty much any belief. I can also ask, did Jesus command to believe in the pre-trib rapture? Did Jesus command to speak in unintelligible tongues? Did Jesus say that only adults can be baptized? It is illogical to assume that because I can ask these questions, that these doctrines are false, the same way it’s illogical to assume the Investigative Judgement is false because this question can be asked. The questions remain meaningful no matter how it’s asked. One need only respond using the bible. The problem is not the question, the problem is with the person who refuses to answer the question. And Sola never actually answered the question.1

Now after accusing Adventists of misusing Matthew 5:17-19, Sola informs us that Adventists say that since heaven and earth are still here, therefore the law is still here. You will note that Sola does not respond to this. Instead, he tells us that the phrase “law and prophets” means the “whole Old Testament… the Torah and the prophets.”

First of all, this does not change what Jesus said. The text itself explains that the “law and the prophets” will remain as long as heaven and earth remain. To cement this further, notice the following text which uses the same phrase:

“Therefore all things whatsoever ye would that men should do to you, do ye even so to them: for this is the law and the prophets.” (Matthew 7:12)

Second of all, it is true that generally, the phrase “law and prophets” represents the collection of laws and the writings of the prophets of the Old Testament. It is also true that Jesus came to fulfill them. But you have to truly study to see what “fulfilled” means. For example, if by “law and prophets” Jesus means the whole Torah came to an end, then why do New testament authors speak of some of those laws as remaining? Like Paul, when he said in Ephesians 6:1-2 that the 5th commandment is, not was, the first commandment with a promise.3 Clearly this law, which was a part of the Torah, remained long after the cross. James 2:10-12 speaks of other commandments remaining even after the cross as well. And there are numerous other examples. We can’t just bundle the whole Old Testament into one package and claim the whole thing came to an end while we also can’t claim that the whole thing didn’t come to an end. One needs to do some serious investigating to determine what remained and what ended.

And what of the writings of the prophets? As I mentioned in part 1 of this series, critics will use Matthew 5:17-18 and interpret “fulfilled” to mean “abolished” but will avoid making the same claim for the “prophets” because, obviously, there are numerous prophecies by the Old Testament prophets that are yet to be fulfilled.4 It seems to me that these critics like to pick and choose what “fulfilled” means based on their own personal opinions and/or agendas.

How do we know what remains, and what ended? Well, Sola himself gave us a hint. The context of Matthew 5 mentions a few of the laws that remain and those that do not remain,5 along with a deeper understanding of each of those laws. In other words, we know something remains when either Jesus or a New Testament author directly tells us it remains. We really don’t have to guess, nor should we bundle the whole Torah into any of this as Sola has done. It’s simple, just let the authors of the New Testament tell us what remains. It’s always safer that way.

I touched on this above a bit. This is not an “all or nothing” type of thing. Jesus directly tells us what remains in the context, and also in other places like Matthew 19:18-19. New Testament authors will also tell us what does not remain, such as when Paul tells us that circumcision of the flesh means nothing (1 Corinthians 7:19). Regarding the prophets, yes, Christ came to fulfill them, particularly those prophecies that pertained to his first advent. But there are other prophecies yet to be fulfilled as well, which is why we can’t bundle the whole thing into a bundle that ended at the cross.

Let me be clear, Christ came to begin fulfilling both the law and the prophets, but that process has not ended, because many laws are said to remain, and many prophecies are yet to meet fulfillment. This is why Jesus said that the law remains “till heaven and earth pass” because it is at THAT point when absolutely everything will be “fulfilled!”

This concludes my response to video 3. Response to Video 4 coming soon. I pray that this is a blessing for both Nachum and every reader. May God’s truth be vindicated.

If Nachum would like to debate these responses, I invite him to do so.

1. I could take up the task of proving biblically the Investigative Judgement but that is not the scope of our study right now, though answers to this can be furnished upon request and for another study.
2. It is my understanding, based on the same phrase as used in Matthew 7:12, that “til heaven and earth pass” means eternity, because it will forever be true that we should treat others as we would want to be treated. In fact, Luke 16:16 tells us that it’s “easier” for “heaven and earth to pass” than for any point of the law to fail. The idea is that the “law and prophets” will never fail because heaven and earth, though they will be “renewed,” will never pass away. This is not the place to explain this further unless requested by my opponent.
3. Note the greek “ἐστί” in this text, which is present tense, proving that this particular commandment was still in force over two dozen years after the cross.
4. Such as the prophecies of the second coming of Jesus, for example (Isaiah 66:15-17), the final establishment of the kingdom of God after the kingdoms of this world have been annihilated (Daniel 2:44) and the restoration of the heavens and the earth (Isaiah 66:22-23).
5. For example, in verse 21 Jesus mentioned the sixth commandment and gives us a deeper understanding of it. Nevertheless, the sixth commandment remains because it continues to be wrong to kill (c.f.   ). However, in verse 38 the old law to repay an “eye for an eye, and a tooth for a tooth” is superseded by the law to “turn the other cheek 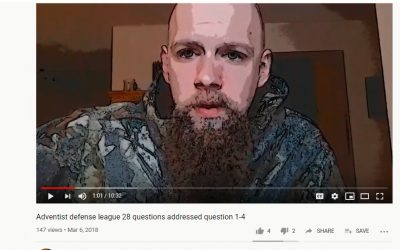 AGAINST NACHUM, part 2: Responding to his “28 Questions Addressed” video series

AGAINST NACHUM, part 1: Responding to his “28 Questions Addressed” video series 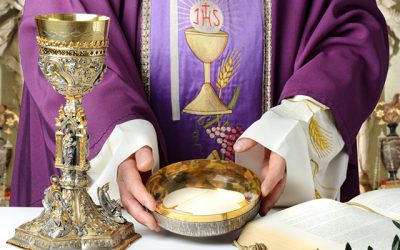 The Catholic Mass and Eucharist Debate