This Essay is UNDER CONSTRUCTION
and is not complete!

The information within this article will be taken from a few different sources, including Medical doctors from my workplace, official Medical websites, and other places.

As a Clinical Medical Assistant I work with patients with various conditions and diseases. I work with Medical Doctors who specialize in all sorts of diseases in a few clinics, including the Medical Clinic, Asthma Clinic, Rheumatology, Podiatry, Cardiology and Endocrinology Clinic. Much of my information was obtain from interviewing a few of these doctors. I also work with other hospital technicians and Registered Nurses.

One of the doctors I interviewed provided some very helpful information and authorized websites that helped me understand more about the links between Masturbation and the various diseases mentioned by Ellen G. White. His name is Dr. Jesubathum, and it should be noted that at the time when I questioned him and other Physicians about this topic, I never mentioned neither Ellen G. White, the Seventh Day Adventist church, or anything that had to do with religion whatsoever. Neither are any of them connected in any way to the Seventh Day Adventist Church. I simply told them I am preparing an essay for a website on this topic, which is true, until after this article was posted online.

There is evidence to suggest that a link does in fact exist. While translating for a doctor at Saint Micheal’s Hospital in New Jersey, I learned something interesting about the virus called Human Papillomavirus (HPV). This is a STD that can be transmitted mainly through sexual contact, but it can also be transmitted through other means. A strain of the virus can survive for some time on surfaces, including the sink, the bathtub, the toilet seat, on doorhandles, or other like places. At the “Physician’s Desktop Reference” website, Doctors suggest that… 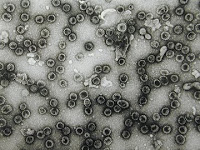 “HPV can survive outside the body, and does not require bodily fluids for transmission. Therefore, it is possible to contract HPV from surfaces that carry the virus, such as locker room floors.” -See PDRHealth.

If a person touches an infected surface (or maybe even an infected persons privet parts), and does not wash himself thoroughly, he risks spreading it to himself if he masturbates. This virus converts parts of the skin surfaces of his or her privet areas into warts, and causes changes in the skins cells.

There is another means by which HPV can be spread. Studies suggest it can spread through the semen. After testing the semen of a few selected people who were infected with HPV, the results of the NLM Gateway, which is a service of the U.S. National Institute for Health, were as follows:

Those dangerous strains of HPV are known to cause various cancers, such as cervix, vulva, vagina, penis and anus cancers. However the most common of these is cervix cancer. Interestingly enough, it can also develop into Lung, Head/Neck cancers, and can promote the growth of tumors:

“About a dozen HPV types (including types 16, 18, 31 and 45) are called “high-risk” types because they can lead to cervical cancer, as well as anal cancer, vulvar cancer, penile cancer and lung cancer Several types of HPV, particularly type 16, have been found to be associated with oropharyngeal squamous-cell carcinoma, a form of head and neck cancer. HPV-induced cancers often have viral sequences integrated into the cellular DNA. Some of the HPV “early” genes, such as E6 and E7, are known to act as oncogenes that promote tumor growth and malignant transformation. Oral infection with HPV increased the risk of oropharyngeal cancer independent of tobacco and alcohol use.” -See Source.

According to the CDC, both men and women are at risk of developing certian cancers via the HPV virus:

“HPV (the virus). Approximately 20 million Americans are currently infected with HPV. Another 6 million people become newly infected each year. HPV is so common that at least 50% of sexually active men and women get it at some point in their lives.

Genital warts. About 1% of sexually active adults in the U.S. have genital warts at any one time.

Other cancers that can be caused by HPV are less common than cervical cancer. Each year in the U.S., there are about:

Certain populations are at higher risk for some HPV-related health problems. This includes gay and bisexual men, and people with weak immune systems (including those who have HIV/AIDS).”

-See The Center for Disease Control and Prevention website.

Cancers are not the only diseases HPV can cause. More then 15 strains (or Types) of HPV can cause a condition known as Epidermodysplasia verruciformis. This disease effects certain genes which are responsible for the distribution of zinc in the cell. Without zinc the human body will develop many other diseases which I will now list:

Question #1: Critic Dirk Anderson points out in Mrs. White’s quote that she seems to be saying that it is “women” who are at higher risk of developing these diseases. He says:

“That quote would seem to put the final nail in the coffin of the zinc deficiency nonsense. If these health problems were indeed caused by zinc deficiency, then why does Mrs. White say women suffer from the same problems, and to an even greater degree?”

Cervical cancer (cancer being one of the diseases Ellen White mentioned), can also be caused by HPV and can only happen in women, or course.

Hosea 2:11 Does this text prophecy the abolition of the Sabbath?