A Sin to have Marital Intimacy?

We were most startled at the following accusation brought against Ellen G. White. A gentlemen known as “Elder W. H. Olson” put together a list of accusations of supposed contradictions between Ellen White and the bible. These are very similar to the list compiled by Robert K. Sanders, of which ellen-white.org submitted a well researched response to. However, one of the accusations found within Mr. Olson’s list of contradictions is the following: 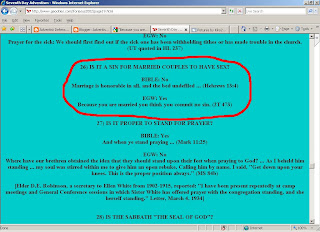 26) IS IT A SIN FOR MARRIED COUPLES TO HAVE SEX?

BIBLE: No
Marriage is honorable in all, and the bed undefiled … (Hebrews 13:4)

EGW: Yes
Because you are married you think you commit no sin. (2T 473)

Something doesn’t seem quite right with number 26. We did a Google search and found that there are at least 6 other websites that share this accusation, and in every one of these websites they appear in the exact same way. What we couldn’t find, however, was this same quote in any of the published writings of Ellen G. White. And here’s why, Elder Olson changed some of the words in the original quote:

“So miserable an existence is entailed upon a large class that death would to them be preferable to life; and many do die prematurely, their lives sacrificed in the inglorious work of excessive indulgence of the animal passions. Yet because they are married they think they commit no sin.” –Testimonies for the Church Volume Two, page 473.

Did you notice something different between the way it is quoted by our critic and the way found in the original? The words “they” were changed to “you.” Isn’t he so honest? How about those other critics who simply copied and pasted from Mr. Olson… do you think they honestly did their research?

This is a common thread among our opponents. Normally some critic has a grudge against us, or, they simply want to fill their websites with as many articles as they can. So rather then doing their own research, they plagiarize other like-minded individuals. How do our opponents expect us to take anything they have to say seriously when they do things like this?

Not only did our critic alter three words in the quote, he also ripped this quote completely out of context. Let’s read again what she said, only this time we’ll quote some surrounding context. Note the “bolded” sections:

“Many parents do not obtain the knowledge that they should in the married life. They are not guarded lest Satan take advantage of them and control their minds and their lives. They do not see that God requires them to control their married lives from any excesses. But very few feel it to be a religious duty to govern their passions. They have united themselves in marriage to the object of their choice, and therefore reason that marriage sanctifies the indulgence of the baser passions. Even men and women professing godliness give loose rein to their lustful passions, and have no thought that God holds them accountable for the expenditure of vital energy, which weakens their hold on life and enervates the entire system.

The marriage covenant covers sins of the darkest hue. Men and women professing godliness debase their own bodies through the indulgence of the corrupt passions, and thus lower themselves beneath the brute creation. They abuse the powers which God has given them to be preserved in sanctification and honor. Health and life are sacrificed upon the altar of base passion. The higher, nobler powers are brought into subjection to the animal propensities. Those who thus sin are not acquainted with the result of their course. Could all see the amount of suffering which they bring upon themselves by their own sinful indulgence, they would be alarmed, and some, at least, would shun the course of sin which brings such dreaded wages. So miserable an existence is entailed upon a large class that death would to them be preferable to life; and many do die prematurely, their lives sacrificed in the inglorious work of excessive indulgence of the animal passions. Yet because they are married they think they commit no sin.” {2T 472.2-3}

From the context we can see that she is in agreement with Paul, who said that believers must be temperate in all things (2 Corinthians 9:25, Titus 1:8, 2:2). And yes, “all” means all, including sex.

Ellen White is not saying that having sex in marriage is a sin, she is saying that being indulgent/abusive in sex can lead to unwanted results:

“Even men and women professing godliness give loose rein to their lustful passions, and have no thought that God holds them accountable for the expenditure of vital energy, which weakens their hold on life and enervates the entire system.… their lives (are) sacrificed in the inglorious work of excessive indulgence of the animal passions.”

According to the wise teacher, sex is good:

Proverbs 5:18-19
(18) Let thy fountain be blessed: and rejoice with the wife of thy youth.
(19) Let her be as the loving hind and pleasant roe; let her breasts satisfy thee at all times; and be thou ravished always with her love.

But as is true of everything else, it can be harmful if abused. We must be mindful of how we treat our bodies, for it is, after all, “the temple of the Holy Ghost” – 1 Corinthians 6:19. And if we mistreat and harm this temple, the promise is that God himself will destroy us:

Now we can understand her concluding statement:

“Yet because they are married they think they commit no sin.”

We can see that she is speaking about married couples who “think” that because they are married they can’t sin in this way, that is, in sexual abuse/indulgence. Notice her next few statements:

“Men and women, you will one day learn what is lust and the result of its gratification. Passion of just as base a quality may be found in the marriage relation as outside of it. The apostle Paul exhorts husbands to love their wives “even as Christ also loved the church, and gave Himself for it.” “So ought men to love their wives as their own bodies. He that loveth his wife loveth himself. For no man ever yet hated his own flesh; but nourisheth and cherisheth it, even as the Lord the church.” It is not pure love which actuates a man to make his wife an instrument to minister to his lust. It is the animal passions which clamor for indulgence.”

In other words, “lust” should not be what drives us to make love with our spouses, because it will only result in indulgence and abuse (over doing it). Rather, pure love should be the motivating factor for marital intimacy, for we ought to love our spouses even as Christ loves the church, in perfect holiness and purity. By these statements, Ellen White is not condemning normal sexual intercourse between a husband and wife who are unselfish, loving, understanding and kind with each other. She is condemning the insensitive behavior of a lustful man or women who seeks merely to gratify his lusts rather then to truly please his or her partner.

Ellen White vehemently opposed anti-sex campaigns which were frequent among religious fanatics in her days, so it would seem rather strange for her to now oppose sex in the marriage relationship. Notice the following finding shared with us by Dr. Leonard Brand and Don S. McMahon:

“One man had prepared a tract advocating abstinence for married couples except for procreation. He tried to get an appointment with Ellen White, hoping for her blessings on his tract. She refused to see him for a while. Eventually, however, she gave him the opportunity to present his views. When he was through, her only comment was, ‘Go home and be a man.’ He took the hint and did not publish his tract.” –The prophet and her Critics, page 83.

“So,” concluded Dr Leonard, “Ellen White did oppose intemperate and lustful sexual relationships within marriage. But she gave balanced advice. That advice seems well summarized by the following statement:

‘Jesus did not enforce celibacy upon any class of men. He came not to destroy the sacred relationship of marriage but to exalt it and restore it to its original sanctity. He looks with pleasure upon the family relationship [sexual intercourse] where sacred and unselfish love bears sway.’” –Adventist Home, page 121.

THE ROBE OF RIGHTEOUSNESS AND VICTORY OVER SINS