Notice: This is only a section of an upcoming study called “Why you need to do your own research.” Please read the introduction first. 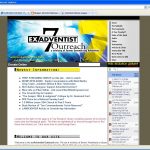 In 2001, Adventist Pastor A. Jan Marcussen resurrected a reward offer of $1 Million to anyone who can produce just one bible verse where God commands Christians to keep holy the first day of the week. Since then, Marcussen has meet with a lot of challengers, but not one has been successful. However, we have found what seems to be a response to this challenge by an ex-Adventist Pastor named J. Mark Martin. Now this doesn’t seem to have been written in response to Marcussen’s challenge, but you will see how it certainly seems like an attempt to prove that the bible does, some where, command Sunday observance. We will first begin by sharing with you what Pastor Martin says. Below is a screen copy from his website, and following are his own words in quotation marks: 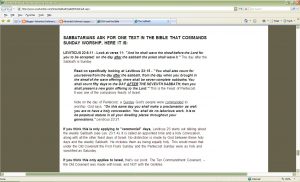 “SABBATARIANS ASK FOR ONE TEXT IN THE BIBLE THAT COMMANDS SUNDAY WORSHIP, HERE IT IS:

Read on specifically looking at Leviticus 23:15 – “‘You shall also count for yourselves from the day after the sabbath, from the day when you brought in the sheaf of the wave offering; there shall be seven complete sabbaths. You shall count fifty days to the DAY AFTER THE SEVENTH SABBATH; then you shall present a new grain offering to the Lord.'” This is the Feast of Pentecost. It was one of the compulsory feasts of Israel.

Note on the day of Pentecost, a Sunday God’s people were commanded to worship. God says, “On this same day you shall make a proclamation as well; you are to have a holy convocation. You shall do no laborious work. It is to be perpetual statute in all your dwelling places throughout your generations.” Leviticus 23:21.

If you think this is only applying to “ceremonial” days, Leviticus 23 starts out talking about the weekly Sabbath (see Lev. 23:1-4). It is called an appointed time and a holy convocation, along with all the other feast days of Israel. No distinction is made by God between these holy days and the weekly Sabbath. He includes them as being equally holy. This would mean that under the Old Covenant the First Fruits Sunday and the Pentecost Sunday were as holy and sanctified as Saturday.

If you think this only applies to Israel, that’s our point. The Ten Commandment Covenant, –the Old Covenant was made with Israel, and NOT with the Gentiles.

Pretty convincing at first, yet, a simple reading of the entire chapter of Leviticus 23, plus a little investigation on the feast days, will prove this to be a faulty assertion.

An overlooked verse
Towards the end, Pastor Martin makes the following claim:
“No distinction is made by God between these holy days and the weekly Sabbath. He includes them as being equally holy.”

His bases for this is in the fact that both the weekly seventh day Sabbath (verse 1-4) and the feast sabbaths are found in the same chapter. We agree they are found in the same chapter… in fact, we agree both were commanded by the same law giver, God. We can not agree however, that there is no distinction made within this chapter between the weekly sabbath and the feast days. Notice with us the following few verses:

There are three things mentioned within these verses, two are plural, and one is singular:

Within the context of the feast days, God himself sets a difference between those same feasts, offerings, and the weekly Sabbath. The above quote by Pastor Mark says that that no distinction is made between the feast days and the weekly Sabbath; that both are equally holy. We agree both were equally holy, but this does not mean they were not set apart for different use and meanings. That they are set apart is further proven by the Hebrew word God used in verse 38.

The word “beside” is translated from the Hebrew word “bad” which under Strong’s concordance has the following meaning:
“From H909; properly separation; by implication a part of the body, branch of a tree, bar for carrying; figuratively chief of a city; especially (with prepositional prefix) as adverb, apart, only, besides: – alone, apart, bar, besides, branch, by self, of each alike, except, only, part, staff, strength.”

Strong’s tells us that this Hebrew word comes from another Hebrew word, number H909. That Hebrew word is “badad.” Here is the Hebrew definition for this word:

“A primitive root; to divide, that is, (reflexively) be solitary: – alone.”

We notice first that the Hebrew “bad” used in Leviticus 23:38 comes from a word that specifically means “to divide, be solitary.” Now the use of this word in Leviticus 23:28 as “bad” gives it an even more special meaning. Notice first that the very first word given to describe its meaning is the word “separation.” Then by implication it means a “part,” as in a “part” of a tree, or a “part” of a body. As part of your body, you have your hand, right? But to what is that hand attached to? To your body, the main cause for the hand. Likewise a branch is a part of the tree, yet it is set apart from the other branches. It is a proven fact that your two hands are NOT identical. One arm will always be longer then the other. One hand will have slightly diffirent finger print designs. Branches are much the same… none will never be exactly alike. There will always be a diffirence between them!

This is exactly why this was the word used to describe the separation of these two sabbaths. Both of these came from God (by analogy, the hand from the body), as a branch comes from a tree. God spoke and commanded to observe both these sabbath feasts and the weekly seventh day Sabbath. Yet there is a separation that God himself does when commanding their observance. He separates one branch from the other, claiming very clearly that they are to be separate. But why? The following are a couple of reasons:

-Was instituted before sin, along with Marriage (Genesis 2:1-3).
-Before sin, the Sabbath did not require a sacrificed lamb every week.
-Is a memorial of creation.
-Will be kept far into the future after sin is eliminated (Isaiah 66:23).

-Was instituted along with the sacrificial system after sin (Leviticus 23).
-Some of the feasts are also memorial of past events, but not of creation.
-Required quite a number of animal sacrificial services upon each observance.
-No indication that the feasts will be kept after sin is eliminated.

As we can see, the reasons are very clear. God had different plans with the seventh day Sabbath. And as one branch is is never equally as long as the other, and one arm is always a tad longer then the other, the Sabbath will stand as that longest branch, for it came into the picture before the sabbath feasts, and it will continue in this picture forever!

Why is it that we find it mentioned in Leviticus 23? Because of the two following reasons which both these institutions shared:

-Both have special lessons to be learned.

By mentioning the weekly Sabbath rest first, God was paving the way for showing the Israelites that the feast days were also days upon which to rest, for they too are called sabbaths (Feast of Trumpets for example – verse 24). However, the reason for observing them were different. One was as a memorial of creation (the weekly Sabbath) the others were memorials of certain past events and of events yet to take place.

So we find that God, the giver of both laws as in a tree giving off two branches, sets a “separation” between those two branches by using the Hebrew word “bad” who’s root word specifically means to “divide.” Now if God himself sets a separation between the ceremonial law of feast days and the weekly Sabbath day, why can’t we do the same?

If it does, it would ruin the fact that Pentecost was always to occur three days later. It would go from three days to four days to five days, etc. Yet Jesus was raised to life the third day! If the Jewish calendar was reckoned the way Mark Martin reckons it, how could it prefigure the Messiah who would die and rise the third day?

Mark forgot that the Jewish calendar was reckoned by the New Moon, which means that Passover would ALWAYS land on the “fourteenth day of the first month…” -Leviticus 23:5, but not always on a set day of the week, because that was dependent on when the first new moon appeared. In other words, says Michael Scheifler of biblelight.net, “since the Jewish Calendar is based on observance of New Moons, the festival days will change the day of the week they fall on, from one year to the next.”
We did a little research and found a website called abdicate.net that provides the Jewish calendar along with todays. You can see that in 2005, 14 Nisan (the 14th day of the of the first month) landed on a Saturday which made Penticost land on Monday the 16th:

This is very clear. Passover will ALWAYS be on the 14th of Nisan (Lev 23:5), and Pentecost will ALWAYS occur three days later on the 16th according to scripture. However, based on the New Moon reckoning of the Jewish calendar, it will never land on the same day of the week. If it did, Pentecost will never continue landing on the “third” day, thus affecting the prophecy of our savior who was raised on the third day (Matthew 16:21).

The following is a deeper analysis of this by Michael Scheifler:

–Is Pentecost Always on Sunday?

By claiming that the bible does indeed command Sunday observance through Leviticus 23, two errors were committed:

Error #1: Verse 38 was completely ignored, and both groups of laws were lumped together as one while God himself says different.

Error #2: The prophecy of Jesus Christ was eliminated, making it more difficult to see him foreshadowed in the ceremony of the ancient feast days.

We pray ex-Adventist Pastor J. Mark Martin revises his web page to rather reflect the truth about Leviticus 23. Our critics go so far with trying to prove us wrong that they end up grossly misinterpreting scripture and effecting some of Christianity’s most vidal beliefs.

For look at another discrepency in Pastor Martin’s writings, see our page Stone the Sabbath keeper?

Now check out our next critic:

PART 1: POINT BY POINT RESPONSE TO AN ADVENTIST CRITIC: GALATIANS 3:17-18

AN EXAMINATION AND REFUTATION OF 16 PROPOSITIONS AGAINST SABBATH KEEPING, PART 9