Is slavery a sin?

The following is number 7 in Dirk Anderson’s list of contradictions (the second version) between Ellen G. Whites writings and the bible:

“God is punishing this nation for the high crime of slavery. He has the destiny of the nation in his hands. He will punish the South for the sin of slavery… At the Roosevelt conference, when the brethren and sisters were assembled on the day set apart for humiliation, fasting and prayer, Sabbath, Aug. 3, the Spirit of the Lord rested upon us, and I was taken off in vision, and shown the sin of slavery.” –Review and Herald, Aug. 27, 1861

“Your male and female slaves are to come from the nations around you; from them you may buy slaves. You may also buy some of the temporary residents living among you and members of their clans born in your country, and they will become your property. You can will them to your children as inherited property and can make them slaves for life…” –Lev. 25:44-46

“NOTE: The Bible never says that slavery is a wise or a good practice, and after thousands of years of slavery, during the last 150 years mankind seems to have finally come to the realization that slavery is a bad practice. However, we need to differentiate between a “bad practice” and “sin.” In order for slavery to qualify as a sin it must be a transgression of God’s law, which is the 10 commandments. However, the Bible allowed for Israel to practice slavery and never condemned it as a sin. While slavery may correctly be defined as a bad practice, it is not a transgression of God’s law, therefore it cannot be classified as a sin.” 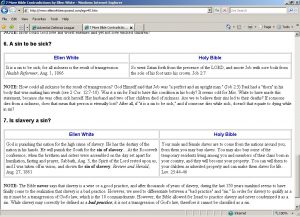 Although Ellen White is not endorsing or promoting any form of slavery, the bible actually speaks about two types of slavery, slaves treated fairly, and slaves treated unfairly. The key to understanding which type of slavery she is here speaking about, one must read her words in their proper context. Let us first learn about these two kinds of slavery:

Exodus 6:5
(5) Moreover, I have heard the groaning of the people of Israel whom the Egyptians hold as slaves, and I have remembered my covenant.

–Slaves to be treated fairly:

Ephesians 6:5-9
(5) Slaves, obey your earthly masters with fear and trembling, with a sincere heart, as you would Christ,
(6) not by the way of eye-service, as people-pleasers, but as servants of Christ, doing the will of God from the heart,
(7) rendering service with a good will as to the Lord and not to man,
(8) knowing that whatever good anyone does, this he will receive back from the Lord, whether he is a slave or free.
(9) Masters, do the same to them, and stop your threatening, knowing that he who is both their Master and yours is in heaven, and that there is no partiality with him.

Now, in context, what type of slavery was Mrs. White referring to as sin?

“The fugitive slave law was calculated to crush out of man every noble, generous feeling of sympathy that should arise in his heart for the oppressed and suffering slave. It was in direct opposition to the teaching of Christ. God’s scourge is now upon the North, because they have so long submitted to the advances of the slave power.”

“The system of slavery has reduced and degraded human beings to the level of the brutes, and the majority of slave masters regard them as such.”

“All the abuse and cruelty exercised toward the slave is justly chargeable to the upholders of the slave system, whether they be Southern or Northern men.” {1T 266.1}

Did Mr. Anderson just tell us that this isn’t a sin?

If you keep reading down in context, you will see that she compares the slavery of her day to the slavery the Hebrews suffered under Pharaoh in Egypt.

Here’s a short testimony by a former slave from Missouri whose mothers name was Mary Peters. You tell him that the way they treated his mother wasn’t a sin:

“I have seen many a scar on my mother. She had mean white folks. One day her mistress… left a lot of work for my mother to do. She was only a girl and it was too much. When her old mistress came back and her work was not all done she beat my mother down to the ground, and then she took one of the skillets and bust her over the head with it. I have seen the scar with my own eyes. It was an awful thing.” -See Slavery’s Echoes: Interviews with Former Missouri Slaves

In case your not aware, skillets are used for cooking and sometimes have long sharp feet:

skillet:
1: a small kettle or pot usually having three or four often long feet and used for cooking on the hearth. –Merriam Webster

Just like the Hebrews while in Egyptian bondage, the southern slaved were treated very unfairly and cruely. Can Mr. Anderson really tell us that this type of slavery is not morally against God’s perfect law? Notice what Jesus said:

There was absolutely no reason why the slave masters of Ellen White’s days hated their slaves in the form of their cruel treatment. When they caused them to suffer the way they did, and thereby expressed their unnecessary anger towards them, they violated the 10 Commandments, specifically the sixth one. Yet we are told:

“In order for slavery to qualify as a sin it must be a transgression of God’s law, which is the 10 commandments.”

Mr. Anderson does not understand the “broadness” of the law (Psalm 119:96), as Jesus Christ taught it in Matthew 5. (for a deeper look at this concept, check out 1 John 3:4: Sin is the transgression of which law?)

Following this statement, our critic tells us that:

“While slavery may correctly be defined as a bad practice, it is not a transgression of God’s law, therefore it cannot be classified as a sin.” -Anderson.

Well, the bible says that…

If slavery is a bad practice as our critics says, then it is wrong, or sin. And sin by definition is “the transgression of the law.” -1 John 3:4. However, we have learned above that, despite what people may think of all forms of slavery today, the honest and fair form of slavery was not a “bad practice.” Rather, the slavery that God permitted was one that treated the servants with the utmost care:

Compassion and consideration was to be expressed even at the time of their slaves departure:

Deuteronomy 15:12-15
(12) And if thy brother, an Hebrew man, or an Hebrew woman, be sold unto thee, and serve thee six years; then in the seventh year thou shalt let him go free from thee.
(13) And when thou sendest him out free from thee, thou shalt not let him go away empty:
(14) Thou shalt furnish him liberally out of thy flock, and out of thy floor, and out of thy winepress: of that wherewith the LORD thy God hath blessed thee thou shalt give unto him.
(15) And thou shalt remember that thou wast a bondman in the land of Egypt, and the LORD thy God redeemed thee: therefore I command thee this thing to day.

Compared to the slavery of Ellen White’s time, the slaves of the Old Testament times were to be treated more like family members then slaves. Note what the above verses teach us:

(1) If the master hurts his slaves, his slave must be set free.
(2) The slave is free to leave on the seventh year.
(3) The master must not send him away empty handed.
(4) He must furnish his slave liberally.
(5) He must do this keeping in mind that he was once a slave himself.

The word “slavery” might have a negative connotation in every sense today, but it certiantly didn’t in the right context back then.

Now notice the next two verses:

Deuteronomy 15:16-17
(16) And it shall be, if he say unto thee, I will not go away from thee; because he loveth thee and thine house, because he is well with thee;
(17) Then thou shalt take an aul, and thrust it through his ear unto the door, and he shall be thy servant for ever. And also unto thy maidservant thou shalt do likewise.

The above verses also suggest that God expected his people to treat their slaves as if they were part of the family. In fact, if a slave who felt he was being mistreated escaped and landed in the hands of another Israelite, he was not to be unmercifully returned to his master, but was to stay with his new master “oppress free” -Deut. 23:15.

Note also that God had commanded the Israelites that even their slaves were to rest from their works upon the Sabbath, saying…

Deuteronomy 5:14-15
“…. that thy manservant and thy maidservant may rest as well as thou. And remember that thou wast a servant in the land of Egypt, and that the LORD thy God brought thee out thence through a mighty hand and by a stretched out arm: therefore the LORD thy God commanded thee to keep the sabbath day.”

Compare this to the slavery of Egypt which Ellen White was talking about, which never permitted them to rest (Exodus 5:5).

The slavery that was a “bad practice” was one that did not practice any of the above qualities. This form of slavery was both a bad practice and a sin, and this was the kind of slavery Ellen White was in context speaking about.

God never intended, nor were the Hebrews ever permitted, to treat their slaves as cruelly and as unjustly as we know the south treated their slaves. Our history books are filled with pages that express treatment of the worst kind, too gruesome to speak about here. Our opponant seems to disagree. To him, this was just a “bad practice.”