Notice: This is only a section of a study called “Why you need to do your own research.” Please read the introduction first.

Jack Gent is probably most famous for his booklet, “God’s Rest” which speaks about the Seventh day Sabbath and of the Sabbath rest found in Jesus Christ. While there may be some things in this booklet we might agree with, most of it has long been responded to as a book containing doctrinal errors. (click here for a response to this booklet). We have found that not only has some discrepancies been found in this booklet, but also in other writings of his as well. The former we feel falls under our disagreement on doctrine, but the following shows why we are reluctant to accept most of what he has to say in the first place. The following research was conducted by our friends at ellenwhite.info.

In another booklet he wrote titled Doctrines of Demons, he makes the following statement in regards to the shut door:

“The last half of the vision addresses a problem that worried believers in the “Shut Door” theory. If the door was shut, no further conversions were possible. No one who was unconverted before October 22, 1844, could after that date be converted. Yet, as opponents of the Shut Door continually pointed out, sinners continued to accept Christ and become Christians — for instance, at the great crusades then being held by Moody and Sankey. These apparent conversions, which seemed to prove that the door wasn’t shut, was a problem that was taken up and answered by the vision.”

Take notice of the sections that are Bolded. To this our Mr. Bob Pickle of ellenwhite.info comments:

Of course Gent’s concerns would be legitimate, if they were true. However, we note the following facts about Moody and Sankey:

Thus Moody and Sankey were not seeing a lot of conversions during public crusades in 1849. What they were seeing in elementary school we do not know.

Apparently Mr. Moody and Mr. Sankey were but children at the time Ellen had her vision of the shut door. What “great crusades” did they hold at the ages of 12 and 8? We dont want to just take mans word for it. We want to see the facts. So we emailed ellenwhite.info with the following question:

While reading through your document on the “Shut Door” in regards to Jack Gent, you made the following comments:

“Of course Gent’s concerns would be legitimate, if they were true. However, we note the following facts about Moody and Sankey:

I wanted to ask you if you could, if possible, tell me where you got all this information from?

To which they replied:

“I believe that we now have studied enough of her teachings and the proof of its source that some of it was undeniably received from deceiving spirits.”

Should we now say the same of his teachings?

Desperate attempt to abolish the Sabbath

Jack Gent has a couple of booklets he’s written on the subject of the Sabbath. In one of them he makes the following few statements which really caught our eye:

Amos, who lived approximately 800 years before the crucifixion, was presented this prophecy by God:

Amos 8:4-9
Hear this, you who trample the needy and do away with the poor of the land, saying “When will the new moon be over that we may sell grain, and the Sabbath be ended that we may market wheat?” … skimping the measure, boosting the price and cheating with dishonest scales . . .
“In that day,” declares the Sovereign Lord, “I will make the sun go down at noon and darken the earth in broad daylight. I will turn your religious feasts into mourning and all your singing into weeping.”

Would just abolishment of the ceremonial feast days allow them to begin marketing wheat on the Sabbath? No! This would require the abolishment of the fourth commandment for God to allow this to happen without penalty. Do we have any record in the Scriptures that met the requirements as to when this ever happened?

This would clearly indicate that they could now start marketing wheat on the Sabbath without penalty. It is very and precisely pinpointed to the time of Christ’s crucifixion. 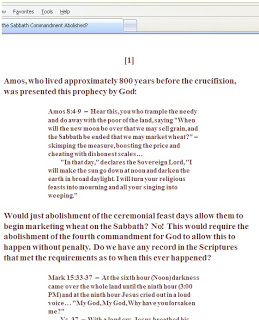 We constantly get told that the only thing we have to say when confronted by our opponents is that they are taking things out of context. But here’s a perfect example as to why we have to say this! If only Mr. Gent would have looked at verse 4 a bit closer, he would have noticed the word “saying.” Who are the ones saying “when will the new moon be over… and the sabbath be ended…” ? It is the wicked!

By not considering the context, Mr. Gent inadvertently sides with the wicked in order to make his point!

Then, if you go just one more verse before this one, you read:

Amos 8:3
(3) And the songs of the temple shall be howlings in that day, saith the Lord GOD: there shall be many dead bodies in every place; they shall cast them forth with silence.

He attempts to connect this chapter with Mark 15:33-37 but, where in all of chapter 15 do we read of “many dead bodies” in “every place?” We only have Jesus who dies first, and two thieves who get their legs broken after. I suppose you can say that “three” is many, but were they really in every place?

John 19:17-18
(17) And he bearing his cross went forth into a place called the place of a skull, which is called in the Hebrew Golgotha:
(18) Where they crucified him, and two other with him, on either side one, and Jesus in the midst.

On the contrary, they were only in one place… Golgotha.

The honest bible student will conclude that Amos was actually predicting the fall of Israel by the Assyrian king, which is why chapter 6 verse 14 says a “nation” would come and take Israel captive “forth of his land.” –chapter 7:17. And that the reference to the going down of the Sun in chapter 8 verse 9 (unlike Mark 15:33 compared with Luke 23:45, which says the Sun would be darkened, theres a differance) is simply a description of how dark and terrible that day would be for the nation of Israel (see Amos 5:20). Can you really blame us when we tell you that your taking things out of context?

If you want a complete refutation of this claim, visit our article called “Amos 8: A prophecy that pointed to Sabbath abolishment?”

Does your name also equal 666?

At another section in Doctrines of Demons we find Mr. Gent making the following comment:

“In the late 1960’s my oldest son was a student at what is now Southern University, Collegedale, Tennessee. During a class discussion of the beast of Rev. 13, that comes up out of the earth and has the number of 666 as an identifying marker. The teacher casually remarked that Ellen White’s name added up to 666 when counting each letter by the usual Roman Numeral value for each letter.”

Well, first of all, every well informed adventist knows full well that her orginal name (you know, the one given to her at birth) was actually Ellen Gould Harmon. This, of course, will not equal 666. Secondly, Ellen White’s name, in Latin, is spelled quite differently. Michael Scheifler explains:

The letter “w” in this case, is proposed to be the equivalent of a double “v” or “u”, which has a value of 5 and is therefore 10 when doubled.. However, in Latin, a single “v” was used to represent the “w”, “v” and “u” sound, the double-u (w) apparently evolved many centuries later in other languages. So, it would seem the correct rendering in Latin would be ELLEN GOVLD VHITE.” –Source

Mr. Gent made a boo-boo in his book. We will make the same mistake below.

For now, notice his next statements:

“I’m sure the teacher and the class all agreed that this had to be an unusual but irrelevant quirk of happenstance. I’m not so sure that this is the case. I believe that if God selected Ellen White to be His messenger to His “remnant church” that He would not have allowed her to be saddled with this onerous marker. I believe it is much more likely that He placed this number on her to help us to realize the source of the material that we have come to believe above the writings of the Bible itself.”

Well no wonder he now opposes Ellen White, he believed her writings were above the bible! If only he didn’t start off that way, perhaps he would have a different position today.

“… if God selected Ellen White to be His messenger to His ‘remnant church’ that He would not have allowed her to be saddled with this onerous marker.”

Not really. God expects the honest bible student to study his word, which if he did, he would have noticed the following in regards the person bearing this dreaded number:

Revelation 13:18
(18) Here is wisdom. Let him that hath understanding count the number of the beast: for it is the number of a man; and his number is Six hundred threescore and six.

He that was to bear this number was to be a “man,” and not a women. Note also the following verses which scholars agree is connected to the 666 man of Revelation 13:18:

2 Thessalonians 2:3-4
(3) Let no man deceive you by any means: for that day shall not come, except there come a falling away first, and that man of sin be revealed, the son of perdition;
(4) Who opposeth and exalteth himself above all that is called God, or that is worshipped; so that he as God sitteth in the temple of God, shewing himself that he is God.

Mr. Gent admits Ellen is not the antichrist spoken of in Revelation 13:18, however, when he makes a statement like…

“[God] would not have allowed her to be saddled with this onerous marker,”

… we feel that, in light of what the verses actually say, God probably wouldn’t of had a problem allowing this, since all it takes is for one to study and acccept “every” characteristic of anti-christ, and not just one. Could Mr. Gent really say, that out of the thousands of godly men and women for the passed 2000 years, not one of their names can be added up to 666? And if some of those did add up to 666, was God therefore warning those around them to stay away from that individual? This is very bad reasoning, for there are many godly people out there whos name might just add up to 666 as well.

I’m sure Jack Gent considers himself a God fearing individual. Why would God allow his name to add up to 666? Unlike Ellen White, Jack Gent is a man, another description of antichrist. Perhaps… “if God selected Jack Gent, he would not have allowed him to be saddled with this onerous marker” either.

By the way, the words “Holy Bible” also add up to 666 in ASCII code. Is this God sent? Here, have fun: CLICK

Mr. Gent might be an honest person, but all we have to go by are his own words. However, sometimes we find critics that dont even “seem” honest. Like the one you will read about next:

DOES 2 Corinthians 3 abolish the ten commandments?

Matthew 24:20 And Closed Gates on the Sabbath

Were Ellen White and the Adventist Pioneers Freemasons?