Sometimes while discussing the Sabbath commandment with individuals, the question comes up in regards to the death penalty which was enacted to the Sabbath. Our critics enjoy this one very much, like ex-Adventist Mark Martin for example. Notice what he says: 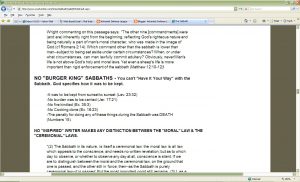 “NO ‘BURGER KING’ SABBATHS – You can’t ‘Have It Your Way’ with the Sabbath. God specifies how it was to be kept… The penalty for doing any of these things during the Sabbath was DEATH (Numbers 15).” –The Sabbath & Sunday, by Pastor J. Mark Martin.

Lets dig a little deeper. Here is how the original commandment reads:

Exodus 20:8-11
(8) Remember the sabbath day, to keep it holy.
(9) Six days shalt thou labour, and do all thy work:
(10) But the seventh day is the sabbath of the LORD thy God: in it thou shalt not do any work, thou, nor thy son, nor thy daughter, thy manservant, nor thy maidservant, nor thy cattle, nor thy stranger that is within thy gates:
(11) For in six days the LORD made heaven and earth, the sea, and all that in them is, and rested the seventh day: wherefore the LORD blessed the sabbath day, and hallowed it.

Notice how originally the Sabbath commandment never included the death penalty. That part of the law did not come until after (in chapter 31) the law was spoken and written by God.

The nation of Israel had just finished experiencing the Exodus from Egypt, and it had just begun the process of learning how to become a “nation.” Like every nation, civil laws are introduced in order to maintain a civil society. Most of these civil laws were divinely given by God… and that was because the nation was at first a theocracy, a nation with God as their king. Its no wonder then that they were introduced into God’s law.

The law to kill the violator of the Sabbath was written as part of the civil laws of this growing nation. It was never part of the divine moral law, nor was it added along with it upon the tablets of stone. This fact makes a clear distinction between the Moral law and the Civil laws. One was written in stone, the other in the “book of the law.”

Anciently when the nation of Israel fell (in 70 AD) so did it’s law. They are no more valid, for they were civil laws that belonged to that nation. The eternal moral law of God, however, is to endure “for ever and ever” (Psalm 111:7-8). It was not merely part of the nation, it is a part God himself, for the law of Ten Commandments is his very character in written form.

Those who excuse themselves of keeping the Sabbath because of this civil law will find it difficult to deal with the 5th commandment… for it to was given a civil law:

The same could be done to the seventh commandment:

Oh, and the third commandment:

If a church member mistakenly says, “Oh my G_d!,” would Pastor Mark Martin argue his “No Burger King” argument and stone his church member? How about if one commits adultery (physically or in mind -Matthew 5:27-28) in his church? Or if one murders someone by hating them “without a cause” or saying “raca!” (Matthew 5:21-22)? Shouldn’t they be stoned as well? Following Pastor Mark Martins reasoning, they should.

Of course, our critics only want to pick on the poor old Sabbath commandment.

We would all agree that the “death” aspect of the law is done away with in Christ, because he paid the death penalty for us on that cross. He took upon himself that “curse” of the law, which is death. But, does Christ’s doing away with the death penalty eliminate our obligation to “honor your father and your mother?” Of course not. It is the same therefore with the 4th commandment, for according to James, all the commandments are equal, and not one is not to be treated differently from the other:

James 2:10-11
(10) For whosoever shall keep the whole law, and yet offend in one point, he is guilty of all.
(11) For he that said, Do not commit adultery, said also, Do not kill. Now if thou commit no adultery, yet if thou kill, thou art become a transgressor of the law.

–Critic #2: Pastor Mark Martin
–The Sabbath in Genesis
–Amos 8: A prophecy that pointed to Sabbath abolishment?